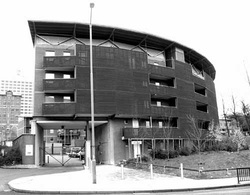 19th January 2006. Image shows the recently evacuated Caspar Apartments (City Centre Apartments for Single People at Affordable Rents) at number 55, North Street, constructed for the Joseph Rowntree Foundation. Unfortunately, the innovative design of the prefabricated apartments did not live up to expectations and an engineering report deemed that bad weather conditions could leave them vulnerable. The £68,500 apartments comprising of a kitchen, bathroom, double bedroom and living area, plus a small 2nd bedroom or home office were designed by Japanese construction company, Kajima and assembled in the factory before being placed on site by crane. The five storeys were self supporting and served by lifts. Each flat was a generous 51 square metres, and they were completed in 2000. (Source: Leodis. Photograph courtesy of James William Bell.)

Truth of the matter was that because they came already built and kind of dropped into place, what actually happened was that the floors were assembled in the wrong order. The ones that were supposed to go on the ground floor ended up on the top floor, and vice versa. So that caused them to be unstable as the intended ground floor constructions were heavier and sturdier but having been put on the top floor meant it would have been top heavy.

Ooops...
On a site on dedicated to urban exploring, someone wrote:

Just found this on the Fix My Street website...

"Email received from Leeds City council, 27 Dec 2007: Thank you for your recent enquiry. I have checked the planning history for the Caspar Apartments site and I can confirm that a planning application was submitted by Life Property Group in June 2007, application number 07/03765/FU, for the Erection of an 8 storey block of flats with ancillary car parking. Having checked with the Planning Officer Daljit Singh, I have been informed that this application was approved by a Central Committee Plans Panel on 6 December 2007 and is awaiting legal conditions to be signed off. If you have any further queries or wish to view this application file then please contact us by telephone on 01132 478000 or email dec@leeds.gov.uk.
Regards
Rory McNulty
Leeds City Council Planning and Development Services
0113 247 8300/0113 2474117

It appears that the site will be redeveloped into an 8 story block of flats with parking?