The history of Stank Hall Barn.

Stank Hall Barn is a grade II* listed building in Beeston, Leeds. It is a medieval barn at Stank Hall Farm on Dewsbury Road and this scheduled Ancient Monument dates back to the 15th century. 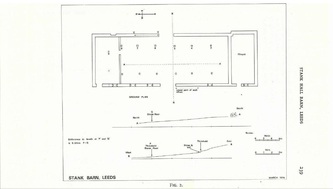 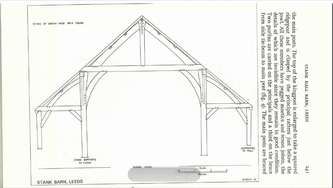 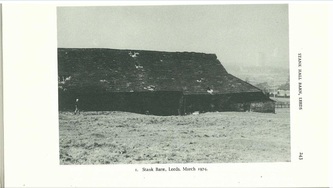 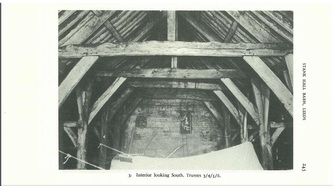 (With thanks to Jason at Economic Policy Programmes Unit at Leeds City Council for sharing these images with me.)
Standing 500 yards from the White Rose Centre, this is said to date from 1420 and allegedly rebuilt in 1492 using some of the timber left over from the construction of the Christopher Columbus ships, the Santa Maria, Niña and Pinta.

The stone building attached to the barn is said to have been used as a chapel by Major Joshua Greathead (1616-1684) who fought in Cromwell’s army at the battle of Adwalton Moor in 1644. At the time Stank Hall Farm belonged to the Royalist John Hodgson. (See note 1 at bottom)

The farmhouse to the right can be dated back to 1615. It is in two parts, one built of stone the other of brick with stone facing. Christopher Hodgson was one of the earlier owners. The Hodgson family sold it to Thomas Kitchingman who was a Mayor of Leeds. In 1796 Robert Dennison bought the property, it then passed into the hands of the Scrutton family. It was eventually sold to the Middleton Fire-Clay Company, then Leeds City Council.

"Some of the main elements of a timber-framed building survive within the brick walls of Stank Hall. They are probably the remains of the earliest house, perhaps built at the same time as the adjacent timber-framed barn. The latter has been tree-ring dated to betweeen 1448 and 1490. There are also some masonry remains, including a latrine closet* and adjacent fireplace that may date to the 16th century. New Hall, originally a stone wing built on to the south end of the hall, was erected in the 17th century, probably by the Hodgsons". (Source: West Yorkshire Historic Environment Record)

(Above photos courtesy of Leodis).
New Hall was an additional wing to the south end of Stank Hall, probably built in the early 17th century by Christopher Hodgson after he purchased the property in 1609. By the 1950s New Hall was a separate property from Stank Hall Farm and was divided into three houses.

The name, Stank Hall is allegedly devised from the number of stagnant pools of water which were in the area. The building on the left is Stank Hall which was the house associated with Stank Hall Farm. The building on the right is New Hall which was divided into three houses which in 1949 (until the 1990's) were the homes of the Cowell, Wilson and Slater families. Stank Hall Farm was owned by Sydney Cowell and his family; they continued farming the estate using the manorial barn for storing hay and corn, stabling horses and sheltering cattle until the mid 1960s. There were also two coal pits recorded in 1840. (source: Leodis)

There's been patch-ups and partial rebuilds in the 16th and 17th centuries but the core of the building is around 500 years old. Which makes it interesting and important given how little of medieval Leeds survives.
The barn is made of a timber frame resting on a stone sill (to stop the posts rotting) and was covered in thackstones - medieval roof tiles. It was originally clad in wattle and daub which was later replaced with stone. The size of the barn reflects the fact that grain needed to be stored on a large scale in medieval times and was typically held in these protected barns away from the weather and pests. On the same site there are two houses which are also listed as grade II and all the buildings were in use until the 1960s. The barn has the higher protection because of its rarity and earlier date.
In 1986 the buildings had been in Council ownership for some years and the barn was in a very dilapidated state, repairs were urgently needed. The Council was hoping for a bail out/grant by English Heritage. They had rejected a plan to turn the barn into a restaurant as the amendments this would have required were deemed unacceptable.

At the end of the 1980s English Heritage worked with Leeds City Council to secure funds and the building was renovated by William Anelay Ltd (a long established Manchester firm specialising in restoration projects). The restoration won a Leeds Architecture Award in 1991 for the quality of the work.
And then LCC turned its back again leaving this South Leeds landmark to fall into decay. 20 years later the barn is in worse condition than ever. (Source: www.exploringleeds.co.uk)
NOTES:
* The carved support stone for the garderobe (latrine closet) can be seen built into the outside chimney works of the house to the left.
Note 1
(Source: http://www.wildyorkshire.co.uk)
After the Civil War, Major Greathead became the collector of Hearth Taxes for the area. After the Restoration, Greathead became involved in the Farnley Wood Plot of 1663. Although his reputation appears to have drawn local people into the plot, Greathead himself turned informer, or rather spy. On the 14th January, 1664, three (of the 26) conspirators were hung, drawn and quartered on a specially constructed gallows at nearby Chapeltown Moor.

The Wikipedia account of the plot states  ‘The executioner, a local joiner, of the name Peter Mason cut off the three heads, and over the course of the night, preserved them. The following day, they were stuck on the railings of Moot Hall. It wasn't until 1677 that the skulls were blown down in a gale.’

Being instigated by the devil, did make use of one Joshua Greathead of Gildersome, as their instrument to seduce and draw several persons into a combination, and did craftily, subtly and maliciously seduce the same persons into a plot.